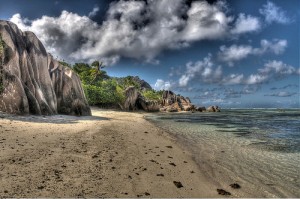 The Seychelles are a group of islands which may be found just off the coast of Africa, a few hundred miles North of Madagascar. The country is an archipelago of about 115 islands which are almost equally split between those made out of granite whilst the others are composed coral. The largest island is Mahe where 90 per cent of the population live and where the capital Victoria is situated. Elevation is quite high on the islands with Mahe having hills that are over 900 metres above sea level.

The Seychelles have a pleasant climate although it is also rather humid with temperatures ranging from a minimum of 24 to a maximum of 29 degrees Celsius. Additionally the island is not prone to high winds so it is a relatively safe place to settle in.

The population is a mix of the French settlers and the African slaves who were eventually freed by the British. There is also a smattering of Chinese and Indian residents who amount to around one per cent of the population. The number of foreign residents is quite low since they are primarily used as a base for offshore companies. Although the language used by almost all the residents is Creole, the inhabitants understand and speak English and French very well. There is also a high literacy rate with just over 92 per cent of the population able to read or write with the rate rising up to 98 per cent if schoolchildren are included in the equation. This makes for highly proficient working people in all industries.

It is quite a young nation having been settled for the first time around 1770 by the French. These brought with them a small population mixed between whites, Africans and Indians. The islands remained under French possession until Napoleon’s defeat at the Battle of Waterloo when they were handed over to Britain to become a crown colony. At that time which was 1814, the population of the islands was around 3,500 and not much work was being done. The British changed all that. The Seychelles were also lucky to have some excellent administrators and governors who included Pierre Poivre who was the architect of the society we know today.

The Seychelles continued to develop and by 1825, the population had doubled in size to around 7,000. The British established estates for the production of foods such as coconut, sugar cane and also cotton. The islands were full of slaves but after a few years this was abolished and the country’s capital, ‘Victoria’ was established. The Seychelles suffered considerably in the famous avalanche of 1862 where vast swathes of property were destroyed and several hundred died.

The country continued to develop and grew to be an important centre for the production of sugar cane and other commodities. They were practically untouched by two world wars and only achieved self-governing status in 1975 followed by independence within the Commonwealth in 1976. This followed years of talks between the British and local political leaders which had begun in a Constitutional Convention which took place in 1970.

Political parties had been established by 1963 and the first elections took place in 1970. The two parties were the Seychelles Democratic Party and the Seychelles People Unity Party. These were led respectively by James Mancham and Francois Albert Rene’. The SDp was victorious winning ten seats to the SPUP’s five with Mancham becoming Chief Economic Minister. Another election followed in 1974 where both parties had independence on their party platforms with the SDP winning a crushing majority of 12 seats out of 15.

After a brief period of power, the Seychelles’ first President James Mancham was deposed in a peaceful coup by Albert Rene in 1977. The country was then under the fiefdom of President Albert Rene’ who practised a socialist and Marxist government until 1991, when democratic elections were held for the first time. Rene won the election and also introduced a new constitution and justice reforms. He also won the 1998 and 2003 elections with James Alix Michel assuming the Presidency of the country in 1994 when Michel bowed down after more than a quarter of a century in power.

The Seychelles began looking at the possibility of increasing its revenue and income from other sources and began an Economic Citizenship Programme which provided those who wished to come to the country with a passport at the nominal price of USD 25,000. This was further increased with a law granting immunity on any offence if more than ten million dollars were invested in the country. It has thus become a considerable tax haven and magnet for wealthy investors and tax nomads who wish to keep as quiet as possible about their activities.

The economy of the Seychelles Islands is focused around tourism and fishing although the country also has a growing services industry. There is a small construction industry which contributes around 10 per cent to GDP and the banking sector has also grown considerably in recent years largely due to the considerable influx of foreign wealth and investment into the country. In fact the services sector which also includes transport and communications has grown to around 70 per cent of GDP with manufacturing reduced to around 15 per cent of GDP.

The island’s Gross Domestic Product was just under 700 million in 2005 while income per capita was close to USD 9,000 which is the highest in Africa by a considerable margin. Due to this relatively high standard of living, the country is not dependent on foreign aid to develop although the economy is quite small thus making it vulnerable to sudden fluctuations.

The Seychelles has also initiated a programme of privatisation and liberalization of the economy. Several restrictive import licences have now gone whilst there has also been a relaxation of foreign exchange deals. This makes it an extremely desirable place to invest since business costs are very low and the climate for such investment is excellent.