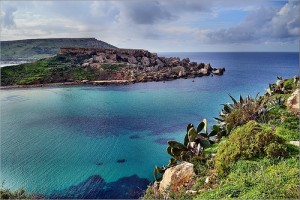 Malta has an incredible history and is a small island in the Mediterranean Sea. Actually it is a group of islands which has Malta as the main island (and the largest settlement), Gozo a smallish island which is more rural and hilly in character (and which has around 8 per cent of the country’s population) and Comino, a small uninhabited island in between which is a popular place for swimming and boating in summer. The archipelago also includes the uninhabited island of Filfla off the western coast which is a nature reserve and has an original species of lizard which is endemic there and is not to be found anywhere in the world. The islands are a major economic and social centre for tourists and foreigners with almost 1.5 million visiting throughout the year and several thousand expats living and working there in some of the high tech industries as well as the financial services and gaming industries which have recently flourished extensively.

Malta’s history begins in the Neolithic period where the island was apparently an important settlement for several mysterious civilizations. Their legacy are the impressive and imposing temple complexes located at Hagar Qim, Mnajdra (in the South West of the island of malta) and the equally impressive Ggantija temple complex outside the town of Xaghra in Gozo. Apart from these main temple complexes the island is dotted with several prehistoric and historic remains such as Skorba and the Tarxien temples in various corners of the islands. The largest underground burial site in Europe is also to be found in Malta and that is the Hypogeum in Paola which has also recently been restored. All these places are a must for a visit.

Malta was occupied by all the main trading empires (apart from the Greeks) and saw rule under the Phoenicians, the Carthaginians and the Roman Empire where a number of buildings still remain which expostulate Roman influence such as the impressive Roman Domus outside Rabat and Mdina, the walled city. Malta took a turn towards intense religious when St Paul of Tarsus was allegedly shipwrecked on the island (an incident which is also mentioned in the Bible) and converted the islands to Christianity. The area around Rabat and Mdina is replete with impressive catacombs that are a testament to the Christian influence.

After a period of relatively unknown occurrences, Malta was occupied by the Arabs in 870 AD. These quickly set about imposing Islam as the religion of the territory and although they last a couple of hundred years, their architectural and historical influence has vanished without a trace. The island reputedly lay uninhabited for another two hundred years after the Arabs departed but was eventually colonized by the Normans and a succession of Argaonese and Byzantines up to the mid-16th century. However the Arabs did leave one important influence on the Maltese and that was their language which to this day remains spoken by almost 100 per cent of the Maltese and has even made it to be an official language of the European Union.

Malta’s fortunes on the historical and cultural front decidedly took a huge turn for the better when the impoverished islands were sold to the Knights of Rhodes after these had been expelled from the Greek island by the Turks. The Knights of Malta quickly began transforming the island and after the Great Siege of 1565, they built the capital Valletta which is probably one of the finest baroque cities in Europe albeit its small size. Valletta is slated as European Capital for Culture in 2018. The Kinghts built magnificent bastions and fortifications and a succession of palaces and auberges which to this day remain important elements of European architecture and which house most government ministries and departments. Another massive achievement by the Knights was the building of one of the finest churches in the Southern European sphere which is St John’s Co-cathedral, an incredible edifice which is replete with magnificent architecture and adorned with countless artistic masterpieces.

The Knights were kicked out of Malta after almost 250 years of despotic rule in 1798 when Napoleon Bonaparte arrived. However the French did not last long since they quarrelled with the local nobility and population and ended up leaving just two years later when the British occupied the islands. Malta was turned into a fortress and the British introduced their own style of living as well as built according to their whims. The English language was introduced and this has also made saved Malta from being a backwater or an extension of Sicily. The British influence lives on in the language was has brought untold successes to the islands on an economic front as well as in architecture with several imposing forts and barracks having been built over the years.

Malta suffered greatly during the Second World War with several large towns being practically destroyed including the Three Cities, Valletta, Sliema and other towns around the airfield. However the islands survived the Italian and German onslaught and after the war although a system of self-government had been in place since 1921, the islands clamoured for independence from the British. After protracted negotiations and even a proposal to integrate the islands into the British system, Malta finally was granted independence within the Commonwealth in 1964. Ten years later, the islands became a Republic with a locally appointed President as Head of State. The next huge change for Malta was its joining the European Union in 2004 after a long and protracted campaign which was even halted at some point by a Euro-sceptic government.

With a population of just over 420,000 and an area of just 319 square kilometres, Malta is one of the most densely populated places in the world. The island is a magnet for financial services and other high tech industry having diversified from a manufacturing based economy in the 1960’s and 70’s to one more specialised and service based in nature. Legislation which won bi-partisan support in 1994 was enacted in the financial services sphere and the country is renowned as being one of the best jurisdictions in this regard.

Malta is also at the forefront of technology with a state of the art communications system that includes the very highest data speeds over the internet. A building boom over the past ten years has seen a diversification of Malta’s architecture and has also provided substantial office space in the form of large business centres in the main metropolitan areas. Attracting several thousand companies in diverse spheres, Malta also repeatedly wins awards as the best domicile for investment purposes. The banking system is rock solid and with a certain level of political stability (this was not always so), the islands are well placed to take advantage of the substantial business opportunities which are on offer. A skilled workforce and several thousand graduates in various fields ensures that investors can take their pick and actually be spoilt for choice when it comes to choosing staff even in the most specialised of fields.